I began blogging to share my interest and information about viewing and visiting our distinctive Lighthouses and meet new friends online with similar interests without adding a ton of legal disclaimers to the footnotes of my blog. A clean Copyright statement should be ample protection, right? Unfortunately, commercial sites can “use” our free speech copyrighted content any way they see fit without our knowledge.

It is shame that certain sites can change our Blogging beliefs and affect our Blogging decisions. Over the past week, I have been trying to make sense of all the Blogging gimmicks, lack of Blogging ethics, etc.

Perhaps, my last post was a emotional solution believing there were no alternatives. Thankfully, your thoughtful comments and eMails inspired me to find other possible solutions. For now, a Attribution-Noncommercial-No Derivative Works 3.0 License appears to provide additional legal protection. The link is wisely spotlighted below the title of the blog as the recommended placement to clearly identify the appropriate use of content.

This license is the most restrictive of six licenses of Creative Commons provides. The Attribution-Noncommercial-No Derivative Works 3.0 License allows others to download my content and share my content with others as long as they mention me and link back to my blog without changing my content in any way or using my content for their commercial use.

Hopefully, this solution will allow me to return to Blogging Basics without worrying about Digital Desperadoes. Blogging Basics will begin by publishing a post a week to eventually two or three posts a week since Google Juice does not bring home the bacon!

Sailing into the Sunset

Between family, work, and other responsibilities, I no longer have the time to write a Lighthouse blog so other people can take credit for posts written by me. Before making this decision, I waited 7 business days for the site to respond which was adequate time to explain their digital disdain. Despite popular belief, Blogging is not a financial rewarding career providing surplus funds to hire digital detectives.

To my readers and subscribers, I apologize for any inconvenience, and I hope you can find another source of entertaining Lighthouse news. For entertaining news, surf over to Ed’s blog for online humor in the news!

This blog will stay online for readers searching for Lighthouse information from past posts.

Meanwhile, we have a few more Lighthouse nautical miles to go before becoming Dusty Lighthouse Keepers!

The 65-feet high coral rock Lighthouse with interior stone stairs was built by Mark C. Honeywell, a Honeywell Instruments Corporation tycoon, who owned the island from 1937 to 1945. Without seeking federal approval, the uncharted private Lighthouse was activated to help his yacht captain locate and enter the harbor. The unauthorized Lighthouse was a confusing hazard to navigators and extinguished soon afterwards!

Both the Lighthouse and the Boca Chita Key Campground are part of the Biscayne National Park, and the Lighthouse is open to visitors when a Park Ranger is available. Camping space is free and available on a first come, first served basis. Saltwater restrooms are the only public amenities. There is no electricity, freshwater, sinks or showers at this ocean paradise!

Machias Seal Island, the nesting place of Atlantic puffins and a working Lighthouse, is in the Grey Zone of a maritime dispute between the American and Canadian governments.

Since the 1870s, both nations have claimed sovereignty of the island. The United States government refers to the 1783 peace treaty with Great Britain whereas the Canadian government refers to a 1621 land grant given to the founder of Nova Scotia, Sir William Alexander.

Furthermore, Canada has occupied Machias Seal Island Lighthouse since 1832 and protected the island as wildlife and seabird sanctuary since 1944 as proof of ownership. Until recently, the internationally disputed area called the Grey Zone has been quiet until the Canadian Department of Fisheries and Oceans allowed Canadians to catch lobsters in the Grey Zone!

Friction between Canadian and Maine Lobstermen is rising as well as the prices of Lobster Grams according to Debo! There has been numerous reports of lobster sabotage as both governments claw their way out of this entrapment! 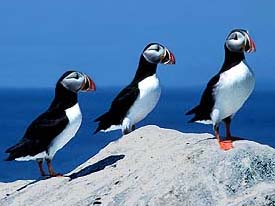 In the meantime, Captain John Norton hopes to continue his “Puffin Tours” to Machias Seal Island from Jonesport, Maine. Tourists can view up to 3,000 Clowns of the Sea (puffins) on the island flying around the Lighthouse! (Link to: You Tube Puffin Video)

The current 60-feet high Machias Seal Island octagonal concrete Lighthouse was built in 1915 and exhibits a Flashing White Light every 3-seconds 82-feet above sea level visible to a range of 17 nautical miles. The Lighthouse is staffed with two Canadian Light-keepers most likely for political territorial reasons. 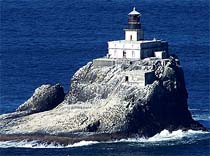 After 23 years of darkness, Tillamook Rock Lighthouse found new eternal life as a beacon for the Dust in the Wind. In 1980, Portland investors bought the Lighthouse for $50,000 and converted the sealed station into a Eternity at Sea Columbarium, the eternal resting place for the ashes of the deceased.

Thirty People paid up to $2,500 to be at eternal peace on the island sanctuary in the Pacific Ocean. According to the first Light-keepers, the Rock Lighthouse was not a peaceful sanctuary and they nicknamed the Rock Light Station, Terrible Tillie.

After 19 years, Eternity at Sea lost its license because the Lighthouse did not qualify as a columbarium and accurate records of the urns were not kept. Apparently, the owners Web site are continuing to look for new “dead Honorary Lighthouse Keepers.” Future Keepers are added to their waiting list for a discount when the Columbarium Niche Options become available!

In 2005, Eternity at Sea applied for a new license which was rejected and vandals allegedly broke in and birds built nests before the doors were repaired and sealed. Birds, Sea storms, and Waves are slowly destroying Terrible Tillie whose roof is leaking and the rock Lighthouse is caked in guano (bird droppings).

Despite the license issues with the Oregon Mortuary and Cemetery Board, Mimi Morissette and her investors hope to raise $1 million for renovations next spring which includes constructing walls of niches in titanium for storing 300,000 urns!

Can you hear the Dusty Light-Keepers singing

“Dust in the wind, all we are is dust in the wind.
Same old song, just a drop of water in an endless sea
All we do is crumble to the ground though we refuse to see”

Tillamook Rock, located 1-mile west of Tillamook Head, Oregon, resembles the head of a sea serpent rising from the ocean. Initially, a Lighthouse was planned to be constructed on Tillamook Head, a 1,000-foot high headland, to aid navigation approaching the safe haven of the Columbia River. Fog frequently enshrouded the top of the cliff making the headland a impractical location.

In 1879, a engineer surveyed the treacherous off-shore rock and determined it was the optimal location for a Lighthouse! The 62-foot high brick-lined sandstone Lighthouse fortress was First Lit on Jan 21, 1881 exhibiting a Fixed White Light illuminated by a First-order Fresnel lens 133 feet above sea level to a visible range of 18 nautical miles.

In 1957, the Lighthouse was deactivated and replaced by a nearby whistle buoy after the Coast Guard determined Terrible Tilly was the most expensive Lighthouse to operate and maintain. The stag Lighthouse was never automated and five male Light-keepers were assigned to duty rotation of 42-days on duty and 21-days leave. In addition, severe ocean storms battered the Lighthouse resulting in repair costs that exceeded the original construction cost of $123,000.

Tillamook Rock Lighthouse is not open to the public, and is best viewed from Ecola State Park and Highway 101 south of Cannon Beach.

Related News Story:
Terrible Tillie, Where the Departed Rest Not Quite in Peace